An Island Built With Peas 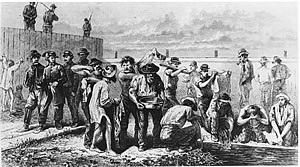 Legend has it that Pea Patch Island was formed when a cargo of peas sank in the shallows of the Delaware River just downstream of New Castle, Delaware, a riverbank settlement colonized by the Dutch in 1651. The wet peas sprouted and grew, catching sand and silt, eventually transforming the bar into an island.

Shortly after the War of 1812, Fort Delaware was constructed on this spit of land. The project had been recommended by Pierre L’Enfant, the French engineer who designed Washington, D.C.

During the Civil War, the fort housed more than 12,000 Confederate prisoners, including many of the soldiers captured at Gettysburg.

It made history in another less celebrated way too. It was among the first locations in the country to place Gimbals toilet paper and Carr’s Patent Hoppers (flush toilets) into service. The officers used the new johns; the prisoners used outhouses which were open to the elements. The desire to escape was so strong that a few prisoners attempted to crawl through the privy hole that led to the river.

“I was registered in Ward II. All of my clothing was taken from me and I was clad in shirt and drawers of coarse texture belonging to the hospital and which probably had been frequently used before by smallpox and other diseased patients. ‘Doctor Miller,’ a youth of about 20 years, diagnosed my disease and pronounced it ‘remittent fever.’ “

Although the fort was manned with military personnel during the Spanish American War, World War I, and for a brief time during World War II, it never saw military action. It was declared surplus in 1943 and eventually turned over to the State of Delaware.

Today, Fort Delaware State Park is a popular tourist attraction. It is accessible by boat from Delaware City, Delaware and from Fort Mott State Park in Pennsville, New Jersey via the Three Forts Ferry (private boats are prohibited from docking at the park). And at the north end of the island is a protected wildlife preserve, nesting grounds for five species of heron, cattle egrets, snowy egrets, glossy ibis, and numerous other waterfowl.

There are no events at this time.