Ground Breaking of the Castle Trail on the C&D Canal 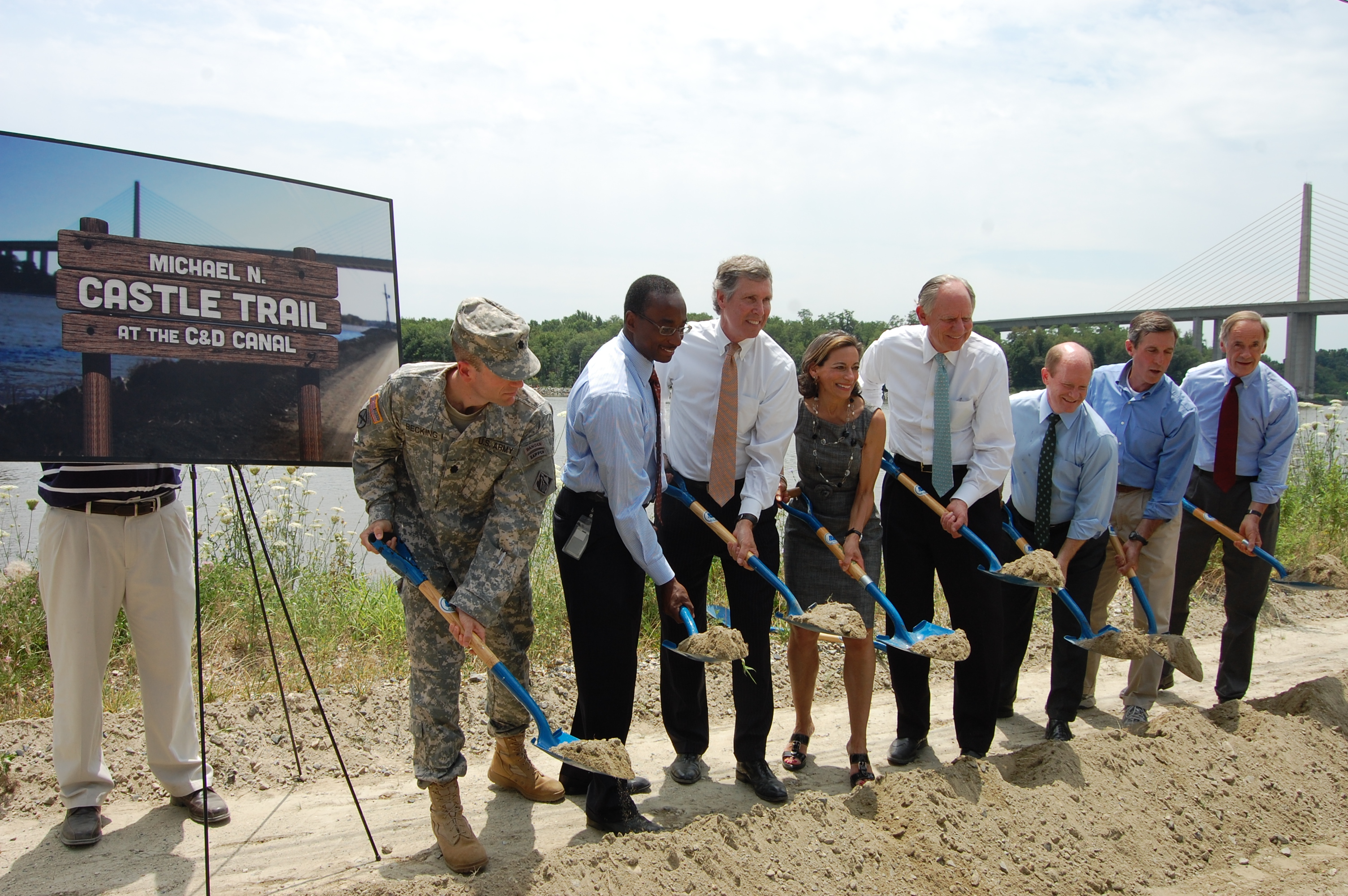 U.S. Senators Tom Carper and Chris Coons, and U.S. Rep. John Carney joined federal, state and local officials to announce the naming of the Michael N. Castle Trail at the C&D Canal. Monday also marked the groundbreaking of the first phase of the approximately 16-mile long shared-use recreational trail along the north side of the C&D Canal. The trail will create safe new recreational opportunities along the canal where people can hike, bicycle, jog, skate, bird watch and ride horses.

“Today, we are celebrating the beginning of turning this waterway, which sees more than 25,000 vessels pass through a year, into a recreational attraction,” Senator Tom Carper said. “This is the kind of project that gives back to the community by creating a place to bike, walk, run, horseback ride and enjoy this beautiful and serene passage through the state. Naming this trail after Congressman Mike Castle is a great way to honor his legacy of working to improve our state’s natural resources.”

“Mike Castle long ago embraced the notion that the C&D Canal is like an emerald necklace draped across the northern portion of our beautiful state, and I am so very pleased that this jewel will be named after our dear friend,” Senator Chris Coons said. “Quite a few Delawareans, including Mike Castle, have worked hard over nearly eight years to transform this path into a greenway, and I’m pleased today we’re celebrating the groundbreaking. I look forward to the day when my family and I can join others in exploring the beauty of the C&D Canal via the Michael N. Castle Trail.”

“I’m excited that the C&D Canal Trail is moving into its construction phase,” Congressman John Carney said. “This project will allow thousands of Delawareans every year to appreciate the natural beauty of this part of our state, and they’ll do so while walking, biking, or doing other activities that contribute to a healthy, active lifestyle. During his years as an elected official, former Congressman Castle did a lot to help preserve Delaware’s natural resources and keep people healthy. It’s very fitting that this trail be named for someone who spent a tremendous amount of time and effort to help create it.”

“These trails are a draw for our tourism industry and raise the standard of living for anyone here in other industries. They offer economic and social benefits that will pay dividends in the years ahead,” Governor Jack Markell said. “It is great to see levels of government working together to create places that can bring families together. Given his commitment as our Governor and Congressman, both in bringing people together and in improving our quality of life, it’s fitting that these trails will carry Mike Castle’s name.”

“I am both humbled and honored that this magnificent trail is being named in my honor,” former Congressman Mike Castle said. “The C&D trail project is a culmination of literally years of hard work and determination by many great Delawareans and the organizations they represent. They recognized that this canal, that literally divided our state, could be something so much better—a place where thousands of people of all ages with diverse interests could come together to enjoy a beautiful natural resource. To have played a minor role in this success is something that I will always remember.”

Trail named after former Congressman and Governor Mike Castle In the three years after a concept plan for the trail was developed in 2006, Delaware’s Congressional delegation secured a total of $2.2 million in Public Lands Highways Discretionary awards from the Federal Highway Administration to go toward planning and building the trail. Last year, the Delaware Department of Natural Resources and Environmental Control committed $1 million in state funding from the 2011 Bond Bill, and the project was awarded an additional $1 million from the Federal Highway Administration. Combined, this $4.2 million in funding is enabling construction of approximately nine miles of the north side of the trail, from Delaware City to just beyond Summit Marina, including parking and rest facilities, and connecting to existing recreation opportunities at Lums Pond State Park. The trail, slated for completion in February 2013, is being built by Daisy Construction Company of Newport, Delaware. Additional phases of the trail will be completed in the future.

“As one of America’s first commercial corridors, this canal has been an important part of Delaware’s economy since the early 1830′s,” Federal Highway Administrator Victor Mendez said. “182 years later, the C&D Canal continues to demonstrate its significance by creating jobs for workers and expanding recreational access through improved transportation options for bicyclists, hikers, joggers and others.”

“We are pleased to have been part of the team that designed this new trail. It is always satisfying to see a shovel going into the ground after so much study and planning and we are grateful to the state of Delaware and its congressional delegation for stepping forward and carrying out the construction,” Lt. Col. Chris Becking of the U.S. Army Corps of Engineers said. “Countless citizens will benefit. Those who already use the road along the C&D Canal for recreation will find their experience greatly enhanced. And many more people will undoubtedly be drawn to the canal to hike, run, and ride bicycles or horses now that the path will be more comfortable and amenities available.

“Trail users are a diverse group of people, including equestrians, bikers, and hikers. The common thread is eagerness and enthusiasm to get outside, get some exercise and connect with other people,” David Koppeser, president of the Wilmington Trail Club said. “We are very grateful to the State of Delaware for their commitment to trail development in the state and to projects like the C&D Canal trail.

“Today’s groundbreaking brings Mike Castle’s vision of a multi-use recreational trail along the C&D Canal another step closer to reality,” said DNREC Secretary Collin O’Mara. “This trail is an important component of Governor Markell’s First State Trails and Pathways Plan which will connect communities, spur tourism, promote healthy lifestyles, improve air quality, and enhance our quality of life. It is fitting that we honor Congressman Castle by naming this trail after him.”

“As a former Governor and Congressman for Delaware, Mike Castle championed the effort to share the beauty of the C&D Canal with all citizens and visitors of the State and for this, it is aptly named,” DelDOT Secretary Shailen Bhatt said. “We have incorporated the C&D Canal Trail into the First State Trails and Pathways Program, part of Governor Jack Markell’s vision to build a world class infrastructure for bicyclists, pedestrians and equestrians to enjoy well into the future.”

DelDOT is responsible for construction of the trail along the canal, which is owned and operated by the U.S. Army Corps of Engineers. The C&D Canal has been in operation since 1829 and today it is one of the busiest working waterways in the world. The canal is a critical commercial waterway serving the Ports of Baltimore, Wilmington, and Philadelphia.